I’ve been helping a client identify some performance issues with a new hosting platform they’re in the process of commissioning.

The new platform has New Relic running but unfortunately it only provides an average for response times. Averages can hide all manner of sins so I prefer to look at the distribution of response times, I also wanted a way to compare against the existing platform which has no monitoring on it.

The method I chose was to add time taken to the IIS logfiles and plot histograms using R.

R is a tool for statistical computing that makes crunching numbers and turning them into graphs relatively easy. When I first started using R I found it had a bit of a learning curve and I still have to work had to do anything that’s not trivial but that’s probably a mixture of all the statistical knowledge I’ve forgotten and the language / libraries.

IIS logfiles start with a multi-line header (sometimes they can have one part way through too!) that looks like this

Once the data is in a format we can use, it needs to be imported into R, filtered and plotted as a histogram.

R has a command shell but I prefer to use R Studio when I’m exploring data.

Here I’m only including GET requests for the root that took less than a second (there are a few over a second that skewed the chart, of course the outliers may be interesting in their own right so be careful about removing them) 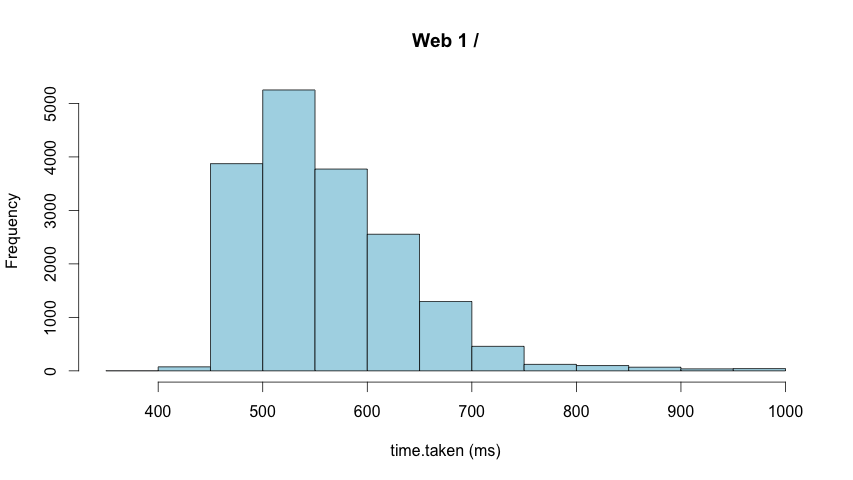 This may be a very simple example but hopefully it goes some way to showing the power of R.

If you need any convincing that you’d benefit from learning some statistics, @zedshaw’s Programmers Need To Learn Statistics Or I Will Kill Them All might help you.