Back in September I explained how to create a private instance of Web Page Test running IE, Firefox and Chrome on Windows 7.

Recently I needed to add some iOS agents, after a bit of trial and error this is the approach I used.

I've added the mobile agents to my existing 'all-in-one' WebPageTest instance so if you've not read the original post it's worth having a quick scan first: Configuring an ‘all-in-one’ WebPageTest Private Instance

At a minimum you'll need access to a Mac with Xcode and iOS Simulator installed. If you want to use a real device as a test agent you will need an iPhone or iPad and an iOS developer account.

Confusingly there's some source code for a mobile agent in the WebPageTest SVN respository but as I discovered that's not the source we want!

We want the code for the Mobiletest agent that Guy Podjarny & Co created at Blaze (now part of Akamai).

Install and Configure the Agent

Mobitest has a set of default settings that need updating to match the WebPageTest instance, for example: 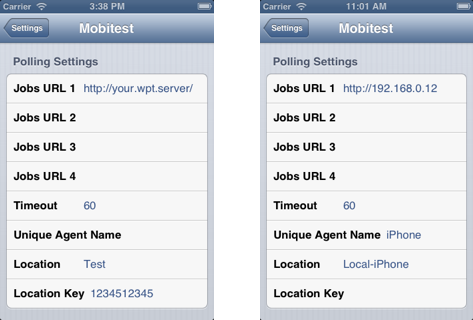 Default settings on left, settings for my install on right.

Add the agent to WebPageTest

Once the test agent is up and running we need to update WebPageTest's configuration so jobs can be scheduled for the new agent.

N.B. Section name must match the name set in [Local] and the Location field of Mobitest Agent settings

I find getLocations.php to be the easiest way of checking agents are configured correctly and requesting jobs.

If either Idle Testers or Being Tested columns are greater than zero then the test agent is successfully communicating with the WebPageTest instance.

You should now be able to use the normal WebPageTest interface to run tests on the device you've just configured.

On https://webpagetest.org, the mobile agents connect via WiFi to a Linux bridge that shapes the network connection.

In either situation you can force the WebPageTest connection dropdown to only show a single label by adding a connectivity entry to the location in settings.ini

In the example below I've added a label that matches the Network Link Conditioner settings for 3G.

Unlike the PC based agents this setting doesn't have any influence over the actual connection settings used and they will always need to be configured separately.

Some other things to note

The Mobitest Agent uses a UIWebView rather than Safari, so any JavaScript on the page won't use the JIT and this may be an issue on Javascript heavy pages. This blog gets roughly the same number of visitors inApp on iOS i.e. UIWebView, as it does from iOS Safari so the UIWebView experience matters.

The Mobitest Agent ignores the physical orientation of the device and works in portrait only.

Pat Meenan reports that an Airport Express seems to be the most reliable base station for iOS devices. He also has a monitor reboots the Mobitest App via SSH when it stops responding.

If you’ve got any questions or spot any mistakes feel free to leave a comment or drop me an email.

If you want to discuss private instances further or need help WebPageTest Forum for Private Instances is the place to go.